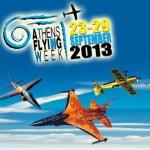 The final countdown has started for the second Athens Flying Week, which runs from September 23 to September 29, 2013, having as its climax the air show at Tatoi. In only its second year, Athens Flying Week has placed itself among the most successful events in Athens. Last year more than 20,000 people attended the event, while this year more than 50,000 are expected.
The peak of Athens Flying Week will be the three-day air show at Tatoi airport from September 27 to 29, where performers will include the Netherlands Air Force F-16, Polish Air Force Orlik Aerobatic Team, Francesco Fornabaio, Red Bull Alpha Jet, Luca Bertossio, Jurgis Kairys, Warter Aviation with Dimitri Ververelis, Blu Circe, Aeroclub Romania, WeFly! Team and Sofianos Ilias. The Hellenic Armed Forces will make a significant contribution to the show, with participation from the special air forces and the Hellenic Police.