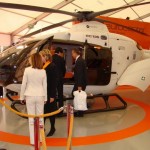 Helitech is the largest European dedicated helicopter exhibition representing every tier of the helicopter supply chain. No other helicopter event offers you a face to face business platform with so many focused qualified buyers of helicopters, helicopter products and services, parts and accessories.

The buoyancy of the rotary wing sector was highlighted by significant contracts announced during Helitech 2009. The exhibition saw an unaudited figure* of 4,047 visitors through the doors over the event’s three-day run – an 11% increase on 2007’s visitor numbers.

The first morning of Helitech 2009 saw more than 1,500 visitors streaming into the show, which is taking place at the Imperial War Museum at Duxford near Cambridge until 24 September. This year’s event has attracted just over 200 exhibiting companies representing 21 different countries and taking up around 4,000sq m of floor space.

Sue Bradshaw, the event’s Exhibition Director, said: “There is always a real sense of community in the rotary wing industry and we aim to create an environment that supports and reflects that. As well as catching up with long-standing customers and contacts, Helitech is all about capitalising on a route into the sector for all levels of the rotary supply chain”

In addition to all the business meetings and networking taking place in the hall, a number of exhibitor announcements and events took place.

Outside the exhibition hall, Helitech’s largest ever static display area, showcasing a total of 42 rotary craft in a variety of configurations, was a highlight of the opening day. Additional features in the static display area are provided by Red Box International, demonstrating its space and cost saving AirLift device, and Host Systems showing how its mobile ATC tower is deployed.

AgustaWestland announced that the Bristow Group has signed an agreement for three AW139 medium twin engine helicopters to be used for offshore transport operations. The deal includes options for additional AW139 purchases by the Bristow Group, which would reinforce the continuing expansion of AW139 in the oil & gas sector.

Rolls-Royce signed an exclusive distribution agreement with AAR, expanding the global reach for aftermarket supply of RR300 parts and services. Ken Roberts, President of the Rolls- Royce Helicopter Engine business said that with the turn-key solution AAR will provide, RR300 operators will have 24/7 access to parts and services critical for their day to day operations.

Eurocopter announced an order for a new EC135 for the West Midlands Police Air Support Unit. Before the new aircraft is delivered next summer, Eurocopter will provide West Midlands Police with a fully equipped EC135 police helicopter, featuring a mission pod, to take over the duties of the aircraft that the force lost recently due to an arson attack.

Operator and support organisation Specialist Aviation Services was celebrating three new contracts signed at Helitech. Lincs & Notts Air Ambulance has selected SAS subsidiary, Medical Aviation Services (MAS), to provide a turnkey support package under a 10 year contract. Its existing Explorer G-LNAA, which has been a regular visitor to Helitech over the years, will be replaced with a brand new factory built Explorer. MAS has also been selected by Essex & Herts Air Ambulance Trust for a two MD Explorer operation. Meanwhile, SAS also announced a new multi-year lighthouse maintenance contract with Trinity House whereby the company will put a specially equipped MD Explorer into service at the end of next year to transport technicians and equipment to remote lighthouses around the English and Welsh coasts.