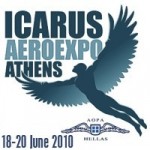 AOPA HELLAS and the organizational committee of ICARUS 2010 would like to invite you to participate to the 2nd International Aero Expo of Athens ICARUS 2010 to be hosted at Tatoi Airfield (LGTT), Athens. ICARUS Aero Expo Athens 2010 is the only International Business and General Aviation Exhibition in Southern Europe.

Southern Europe is proving to be a rapidly developing aviation market thanks to the good weather conditions and to the recent enlargement of the European Union. The aviation world currently has the potential to advertise and dynamically penetrate to the surrounding market, based on Athens, the crossroads between East, West, and a bridge to Middle East.

In June 2008, AOPA Hellas organized ICARUS AEROEXPO 2008, the 1st International General Aviation and Business Aviation Exhibition in Greece, under the auspices of ΙΑΟΡΑ, the Greek Air force and the Ministries of Transportation and Tourism, and sponsored by the Ministries of Transportation and Tourism, ΑΝΤΕΝΝΑ Channel, AIRBP, the aviation press and many others. With more than 40.000 visitors, 60 exhibitors, representing 108 companies, 20 international seminar speakers, 105 airplanes from 12 countries of Europe and the Middle East, airshow with the participation of both civilian and military airplanes, ICARUS 2008 was a great success. It appealed not only to the aviation world but to the general public as well and rightfully gained the 3rd position among European Aero Expos

Visit the land of Icarus, where aviation was born

Aero Expo ICARUS 2010 of AOPA HELLAS will be once more hosted at the Dekeleia airport, which will be ready to receive with a free entrance, its visitors and the aviation world. During the Expo an international Fly-in will be taking place with various events scheduled for the participants, airshow, seminars, happenings and Fly Trials by the aviation schools. There will be free access to the Hellenic Air Force Museum and to a unique private war bird collection within Tatoi airfield.

The Tatoi airfield (LGTT) is home for the majority of airclubs and pilot schools of Athens. It is located just 15 min. to the north of the city and 3 min from the national roads and Attiki Odos. The suburban railway, the subway and the train can transport thousands of visitors from the greater area. The airport offers vast, covered exhibition areas, 35,000m2 of apron, ample hard surface for static displays and can accommodate a vast number of private aircraft. The 5,800 ft asphalt runway is sufficient for up to business jet level aircraft. Car parking facilities inside the airfield are vast and there are hotels in the surrounding area.

The events of the 2nd International Aero Expo Athens are being organized under the auspices of ΙAOPA Europe, which invites the international community to participate in ICARUS 2010. Given the international recognition of IAOPA in the World’s General Aviation community, the organizational support of the Hellenic Air Force and the support of the Greek Government, Aero Expo ICARUS 2010, is bound to be another resounding success with even more resounding benefits for the exhibitors as well as the region’s aviation key players.