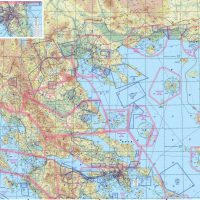 We have the pleasure to inform you that a completely new version of the GAM (Greek Aviation Map) charts covering the Athinai FIR, the Version 3.0 (29/05/2014), is now available.

Since the GAM team of pilots started with the first VFR charts covering the Athinai FIR (V 1.0 – 08/11/2010) they never stopped listening to pilots and users of the charts to improve and provide a better and more practical tool.

They tried hard to do something better, easier to read and to use, with more information in volume but also in accuracy, with the latest updates from the AIP Greece and after several months of hard work, many trials and many, many double and triple checks, they finally managed to finalize the new version of the GAM charts: Version 3.0.

One of the improvements requested over and over was the quality of the background (the geographical information), which were based on the scanning of the old TPC charts (based on information of the 80’ and 90’).

Colors were too dark and too uniform, valley and mountains could not be easily defined, names of villages and towns were not easily readable and with old names or spellings, not enough names of mountains, rivers and lakes or obvious landmarks, image of Greece as it was 25 years ago, without all the new highways, railroads and high power lines which are important reference landmarks for a VFR pilot.

So, for Version 3.0, they decided to start from scratch (blank paper) and with the help of Anavasi Editions (specialized in geographical mapping), they have built a new geographical reference chart, specially made for VFR pilots (colors, altitudes in ft, ground reference marks, etc), they have improved the readability (even small letters of village name are readable) and put a lot of geographical information (village, mountains names, lake names, sea names, dams… ) as Greece stands in 2014.

On top of this new background, they have put all the current aeronautical information based on the last AIP Greece version (29/05/2014) and also put some new and practical information like the availability of fuel at airport.

They will continue to update the charts each time that the AIP Greece will come up with significant changes, giving each VFR pilot the opportunity to have current aeronautical charts with the latest information on board, and they will continue to listen to every fellow pilot who comes up with ideas for improvement, remarks or error report.

In addition to the latest Greek AIP updates (last edition 29/05/2014) the following changes are included:

They have also tried very hard to print the charts in a cheaper way, to make them more affordable to each pilot and to really implement the notion of consumable (an aeronautical chart is only safe and reliable as long as the information on it it the latest available and correct, so it should be changed or updated regularly).

But due to the low production volume, they do not have access to mass-production technology (like offset printing) and each test they did with cheaper paper/printing technology, the results were disappointing (small savings for big paper quality/printing quality loss) .