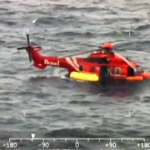 TWELVE oil workers owe their lives to two hero helicopter pilots who pulled off a textbook emergency ditching in the North Sea yesterday.
The Bond Eurocopter 225 Super Puma chopper came down 25 miles east of Aberdeen.
But the captain got everyone on board on to liferafts before evacuating.

A source said: “It was as textbook an operation as you could imagine. The guys didn’t even get their feet wet.”
But the incident once again turned the spotlight on the thousands of helicopter flights which take place offshore every year.
In April 2009 in the Miller oilfield, a Super Puma suffered a “catastrophic” gearbox failure and plummeted 2000ft into the sea, killing all 16 on board.
It’s believed the flight crew in yesterday’s incident detected low oil pressure in the gearbox within minutes of take-off.
Last night, the Unite union said they were “gravely concerned” about the latest ditching.

Regional officer Wullie Wallace welcomed the news that everyone was safe and commended the skills of the pilots.
But he added: “We are concerned that there have been problems with helicopter engines recently that have not been reported to the Helicopter Steering Group.
“Obviously the reason for the ditching has to be investigated, but Unite are calling for an urgent meeting of the Helicopter Steering Group to be convened.”
The routine crew-change flight was en route to two rigs in ConocoPhillips’ Jasmine Field, 147 miles south-east of Aberdeen.

The controlled landing, which left the chopper floating upright in the water, took place at around 12.15pm. A major rescue swung into operation but all 14 survivors were safely on board liferafts within seconds.
Nine were airlifted to Aberdeen Royal Infirmary. The remaining five were taken ashore on an RNLI lifeboat and did not require medical attention.
One man remained in hospital last night. He was said to be “under observation” purely as a precaution.

A hospital spokesman said: “I’m delighted to say it all seems to be minor injuries.
“It looks like they were able to make a controlled exit and we are just seeing bumps and grazes.
“They were all pretty shaken when they first came in and looked pretty pale. They are now getting something to drink and heating up a bit. A couple of them are a wee bit cold.
“It couldn’t have gone smoother from our point of view. They have been very lucky.”
The 12 oilmen were on contract from Ensco, Brandt, Stag and Halliburton and the two crew were Bond employees, a Conoco-Phillips spokesman said.
He added: “Dealing with the incident and ensuring the safety and welfare of the people involved is our top priority.”

All offshore helicopter flights from Aberdeen were suspended during the emergency and Bond said they were suspending EC225 Super Puma flights until further notice for safety reasons.

General secretary of the British Airline Pilots’ Association Jim McAuslan said: “This looks like a terrific piece of airmanship from very skilled pilots.
“A helicopter ditching is one of the most difficult manoeuvres in commercial aviation and yet every passenger and crew member on board was winched to safety.

“We pay the utmost tribute to the pilots involved in the incident and of course the search-and-rescue pilots who came to the passengers’ and crew’s aid.”
Aviation expert Jim Ferguson said: “The definition of a ditching is a controlled landing on to water and this one appears to have been totally successful.
“My information is that there appears to have been some kind of oil pressure problem.
“You cannot mess around with oil pressure – the consequences would be devastating. Instead of a controlled landing, they would have plunged into the sea when the power stopped.
“To my knowledge, this is the first serious problem with a 225 in the UK sector where the aircraft has ended up in the water.”
First Minister Alex Salmond said: “Incidents such as these remain very rare but do serve as a stark reminder of the dangers faced by offshore workers.”