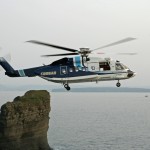 Two life-rafts found near where a helicopter carrying offshore oil workers crashed into the Atlantic Ocean were empty, a search and rescue official said Thursday.

One man, Robert Decker, was recovered alive from where a Cougar Helicopters chopper went down with 18 people aboard Thursday, after issuing a mayday and an alert about technical problems at about 9:18 NT, or 7:48 a.m. ET. The Transportation Safety Board said the helicopter, which was headed back to St. John’s, crashed into the water about 37 minutes later.

Searchers, however, brought back one dead person to St. John’s. No details were released on that person.

Decker was listed in critical condition in hospital in St. John’s. A source told CBC News he had aspirated sea water and was being treated in intensive care for hypothermia and a broken bone.

Lt. David Bowen, a Halifax-based official with military search and rescue, said two life-rafts were located, but no one was aboard.

Although the helicopter had sunk beneath the surface, Bowen said search crews are trying to remain optimistic.

“This is a search and rescue mission,” he told CBC News.

Earlier, officials in St. John’s were unable to say Thursday afternoon how many people survived after the helicopter, which was carrying 18 people and heading to two offshore oilfields, ditched into the ocean.

“We only have one person at this point,” Rick Burt, general manager of Cougar Helicopters, told reporters in St. John’s.

Denis McGuire, who works with the search and rescue co-ordination centre, said officials are being cautious about the fate of the passengers aboard the helicopter, a Sikorsky S92 known as Cougar 911.

“We do not have any indication that anyone was in the life-raft,” McGuire told reporters.

Maj. Paul Doucette, speaking with reporters in Halifax, said authorities believe the crew aboard the Cougar were wearing survival suits.

“That improves the chances quite considerably,” he said.

“We don’t have a set end time…. They’re going as long as they can possibly go,” Doucette said.

Authorities said a healthy adult wearing a survival suit could be expected to live for about 24 hours in the frigid Atlantic waters.

The crash is the first time a helicopter has gone down in Newfoundland and Labrador’s offshore oil industry.

In 1982, the then-developing industry was rocked when 84 men died when the Ocean Ranger, a drilling rig that was exploring for oil in the Grand Banks, sank during a winter storm.

Crew aboard Cougar 911 were largely working at the White Rose offshore oilfield, southeast of St. John’s. Two were stationed at the nearby Hibernia platform. Two of the people aboard the helicopter worked directly for Cougar Helicopters.

Calgary-based Husky, the operator of the White Rose project, and Hibernia Management both said they are assisting with the search and rescue effort.

Another chopper, also operated by Cougar Helicopters, arrived at the Health Sciences Centre in St. John’s at noon with Decker, who was rushed into the hospital on a stretcher. That helicopter had arrived on the scene within 45 minutes of its departure.

Hopes had been high earlier in the day for a larger, immediate rescue. Eastern Health told CBC News that it had cleared its emergency rooms to prepare for what it described as patients who are critically ill and hypothermic.

However, officials later told ambulances that had been waiting near a helipad that they were not needed for the time being.
Crew reported mechanical problems

Bowen earlier had told CBC News that two persons were spotted in the water, about 87 kilometres east-southeast of Newfoundland.

Julie Leroux, an official with the Transportation Safety Board, said the helicopter’s crew reported mechanical problems, but they did not know the nature of those problems.

High winds were reported as aircraft — including a military plane and two Cormorant helicopters — were dispatched to the scene.

The coast guard has also sent one of its ships, and companies active in the offshore oil industry have joined the effort. A supply ship was also en route to the scene.

Cougar Helicopters, which operates the choppers that fly to and from the three oilfields in production off Newfoundland, said it is preparing a statement.
‘All of a sudden, we saw the cameras and police’

Meanwhile, crews that arrived at Cougar’s base, near the main terminal at the St. John’s airport, were told they could not be ferried offshore on Thursday morning.

Having made regular shuttles to the Hibernia platform since 1997, Strickland said safety is a priority, although he has such assurance in the helicopters and their crew that he usually sleeps during the flights, which take between 75 and 90 minutes.

“It doesn’t scare me as such, no. [But] it always crosses your mind at some point,” he said.

Cougar 911 usually flies crews to and from the Hibernia platform, about 315 kilometres southeast of St. John’s, and St. John’s International Airport. On Thursday, however, it was working with a crew stationed at the floating Sea Rose platform, at the White Rose field.