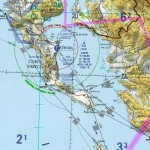 All started when we used to draw with black blue and red pen on aeronautical maps of Greece all the information required to safely fly within Athens FIR (the ones which we were using to find on US charts or West Europe charts).

Then we developed it into a digital version, and we thought that we should not keep it just for our personal use but make it available for other pilots flying VFR within the Athens FIR to cover a missing essential tool for safe flight preparation and planning.

It made it even more important to make it available to other pilots specially now that the NOAA (USA) is not any more (since 2009) printing the only VFR charts covering Greece (TPC G-3A, G-3B, G-3C, G-3D, F-3D), and until some official source will eventually produce it.

The Standard map is easier to fold, lighter and cheaper and the Plastic map is well protected to last longer.

It is just a practical tool from pilots to pilots, to help flying better, easier and safer.

We are looking forward for comments, corrections or improvements and we are planning to continually improve it and we will try to keep it as current as possible. 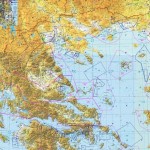